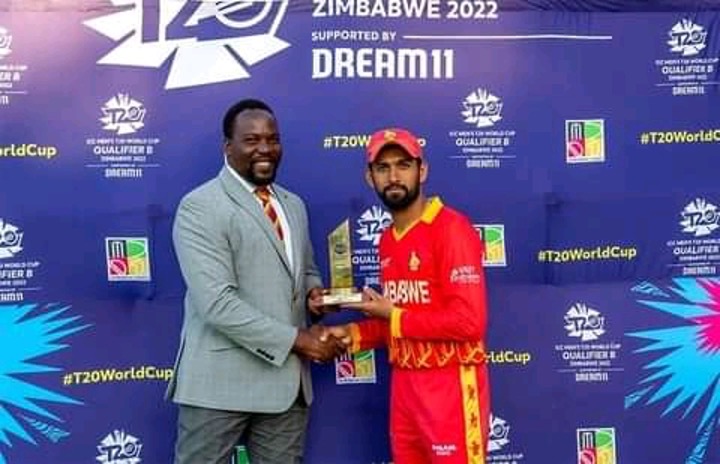 All-rounder Sikandar Raza slammed a career best 87 runs to power Zimbabwe by 111 runs over Singapore in their opening match at the International Cricket Council Men’s T20 World Cup qualifiers B which were held at Queens Sports Club, Bulawayo recently.

Zimbabwe finished in the top position of their group and they will face of with Paupa New Guinea in the semifinals.

Zimbabwean batters got after the Singapore bowling from the start, with Regis Chakabva and Craig Ervine. The two reached 51 in the fourth over but at that point Chakabva ran himself out.

On Tuesday Zimbabwe came back in action against Jersey, who lost during the Tournament’s opening against USA. Zimbabwe won by 23 runs against Jersey, the player of the match was awarded to Sean Williams for his 57 from 39 balls.

This was barely 24 hours after marking his return to the national team following a six-month absence.

After a one-day break, the tournament continued with team Zimbabwe facing off with team USA to determine their semi qualification. Zimbabwe won the toss and elected to bat. Three changed were made as: Richard Ngarava, Milton Shumba and Innocent Kaila were introduced in playing XI.

Zimbabwe won 46 run victory over USA at Queen’s Sports Club in Bulawayo against USA. After maintaining a 100 percent record in the ICC T 20 World Cup qualifiers group B stages Zimbabwe managed to avoid a tricky -semifinal clash with Group B Winners Netherlands.

Among those who have been attending the tournament in support of team Zimbabwe are: Highlanders FC Club players and former Minister of Sports, Arts and Culture Senator David Coltart and the cricket fan lovers from across the country.

In other news of cricket, the Chevrons beat NICE by 8 wickets at NICE Cricket Arena in Bengaluru, India.

NICE were 94.5 after 20 overs. The match is part of team Zimbabwe’s preparations for September’s ICC women’s T20 World Cup Qualifiers which are to be hosted in UAE.

Zimbabwe Women’s team will be in action on the 18th, 20th and 21st of July and all matches are to be played at NICE Cricket Arena in India.