Home>Featured>EXCLUSIVE: Graffiti and calligraphy with BOW 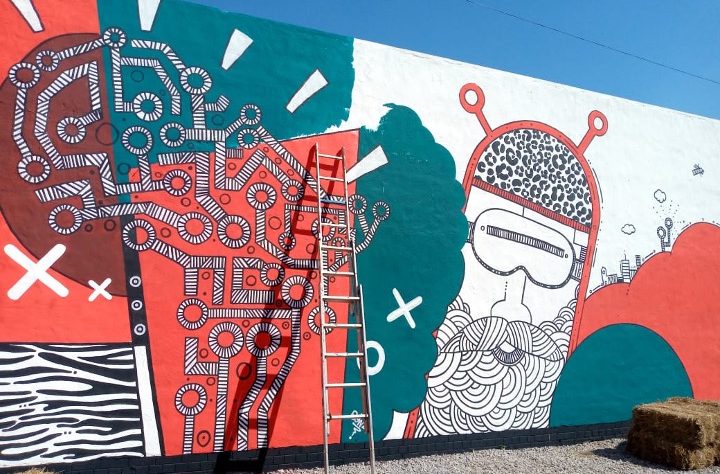 You might have once saw some mural, graffiti or calligraphy works and you were not able to definite which is which.

Multi-talented Zimbabwean based artist, Leroy Brittian known as BOW (BW) had a chat with My Afrika Magazine’s reporter Tapiwa Rubaya (TR) and discussed about his career as a mural artist and he further gave us an insight of the difference between graffiti and calligraphy.

During the discussion we also learnt more about how his work fuses with the African culture.

TR: Can you introduce yourself to our readers?

BW: I am known as BOW but born by the name Leeroy Brittain, a husband and a father and I reside in the City of Kings and Queens (Bulawayo). Hence many know me as Spinx in the music circle and SUP (Still using Pressure) which was the name I used during my heydays in the graffiti industry before I recently changed to BOW (Black or White).

Black or White my name is based on the type of a person that I am since I am colored.

I have participated in various festivals including Shoko Festival, Doadoa Festival in Uganda etc. and also have worked with popular companies such as Ford Dulys, Telco and collaborated with Calligraphy Harare and EU during women’s month to do a series of graffiti -murals around Bulawayo.

TR: There has been a debate on whether your work is Calligraphy or Graffiti and can you classify your work?

BW: Those are two different things; Calligraphy is a style of writing which can be done in a paper; on a T Shirt or paper this can’t be classified as graffiti for Graffiti is something you scribe in a wall.

Whether you are using pen or pencil any message prescribed on a wall is classified as Graffiti. I am a mural/graffiti artist and graffiti is the mother of them all it’s more of illegal side and mural is when you get permission to conduct you work.

TR: Can you tell us how your journey in the arts started?

BW: It all started during my heydays at primary school, I used to draw characteristics of cartoons, robots and spaceships. Each year I was chosen to draw Santa-Claus at the blackboards during Christmas season. That is when I realized my passion in arts and it grew from level to level.

TR: What inspires your work?

BW: My work is inspired by God, hence when people ask me to define art and my response is, art is God. For God is the Master-creator, His creative and Our Father and no one can surprise the creativity of God. We only draw things, that is closely looking real like it’s real but God can create something and it starts living.

In summary my inspiration comes from God, human beings, love God and Africa.

TR: Share with us details of your latest work which was designed at Highlanders and Body Works Gym?

BW: That’s my commercial side of work, I do work according to my client’s side specifications. For that work, at ‘Body-works’ I had to co-operate things that go with the gym and working out.

The Camouflage, I wanted it to look fresh and not hardcore also to be light in the eyes of people .

TR: Besides painting brush, ladders and yourself(lol), what is needed for one to be a professional?

BW: Determination and Passion because if you don’t have these two you can never go anyway because everything starts with passion and determination that is when you give your all.

You don’t have to be jack of all trades, just focus on what you feel your passion is at and everything will follow.

TR: What can you say is your pillar of strength and your biggest obstacle in life?

BW: With the support system from my family, my wife has been there for me, she supports me throughout all difficult times. You need such a pillar of strength even in difficult times, for example when I did the ‘Mbuya Nehanda-Lobengula’ piece.

It was very controversial as some people didn’t take it lightly, my life was then full of threats. That was when I needed someone to make me calm my anxiety, my wife and children were there for me. Their support inspired me to hold on and keep going.

My biggest obstacle is when I used to work for a company, which had nothing to do with my mural work. Then I realized that it wasn’t going the way I was hoping and I quit to purse my art career. During those times things went terribly wrong to an extent that surviving was very difficult.

However, if you have the support from someone who loves you, everything will flow easy. Hence, I give respect to my wife and children.

TR: What is the main reason that, calligraphy and graffiti are linked with Hip-hop and Rap culture?

BW: Hip-hop has some elements which graffiti is one of them and it plays a major part. Hip-hop goes hand in hand with graffiti due to the protesting side.

That is why graffiti is more associated with Hip-hop, however I am trying to Change that narrative and give the African view for hip hop was born through African people, who were protesting and this is the part of the culture that they took from their motherland, “Africa.”

When you trace the history of Africa, graffiti started in Africa, this is evident by San people’s painting and also in Egypt. All that I have stated above were re-born through Hip-hop in America for all was in African man’s DNA to actually practice hip-hop, graffiti, poetry and rhythm.

TR: It brings me to the question how do you apply Africanism or culture in your work?

BW: If you look at my work, I always put some details of tribal art. I in cooperate the Ndebele-Nguni type of art; some tribal art and symbols; African heroes such as Lobengula and Mbuya Nehanda.

My work involves African subjects and that’s my identity. I used to in-co-operate Western, East Asian work and I slowly migrated into Africanism.

TR: Which organization or companies are you aiming to work with?

BW: I am willing to work with any organization and company that is willing to push the ideology and the vision that I push as an artist which is the ‘African Dream’.

I believe in Africa and its vision being great, for example I worked with Telco and I loved working with them and it was easy to work hand in hand with them. They are a company that wants to broaden African technology in terms of Internet,they asked me to add a ‘Wakanda’ style more of Africanism in the art.

TR: Where do you see the future of your brand?

BW: I can’t say I am an ambitious person who has targets on what to do however my dream is for Africa to grow and realize its potential and me playing my part as an artist to make sure that Africa’s dream comes true.

I see Africa as great some other day, I see Africa going to the table of all humanity as an equally entity. That’s where I see myself. If Africa is great, that will bring joy to me for that is the reason I practice my work for Africa to be great.