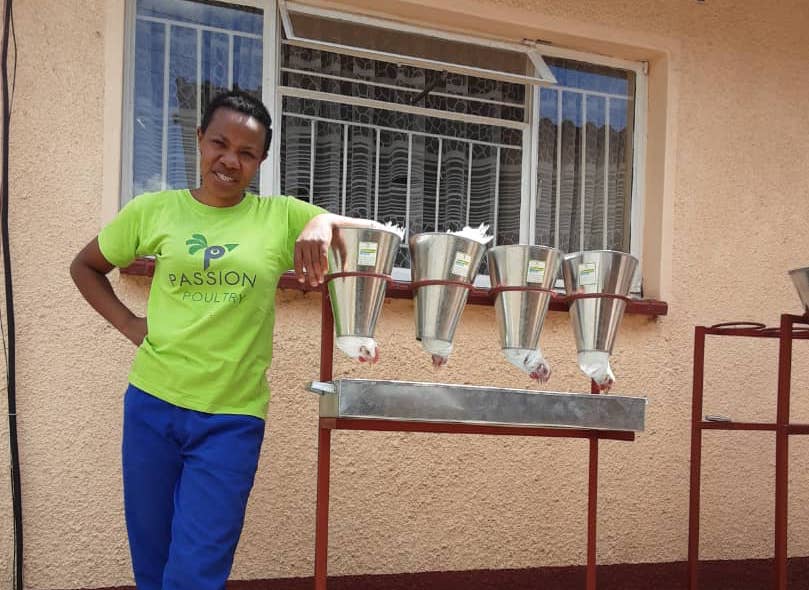 At 10 while girls and boys her age were playing house, with little dolls and plastic made soccer balls, Evangelista together with her sister were fully engaged in the family poultry business.

“My father was a policeman and left work when I was 10 to pursue farming and his first port of call was chicken rearing. My sister and I were taught first hand how to take care of chickens from the time they were chicks to the slaughtering stage. We never had time to be children which is why at my age I still enjoy watching cartoons to bring back that little girl(laughs),” she explained.

Her journey has been full of many lessons, among them that whichever form of farming requires dedication and innovation. As a young girl, Chekera caused the death of 35 chicks in one night as a result of negligence.

“My sister and I always took turns to ensure proper brooding of the chicks, placing them in a warm place and ensuring adequate lighting was there. The brooding period is the most critical stage that determines a profit or loss for the farmer depending on chick mortality.  One night I was too lazy to do my duties and lied to my parents that I had placed the 100 chicks in the box. Early the next morning we had lost 35 chicks out of the batch of 100, a loss I still think about to this day.”

“Watching my family hurt made me regret my actions, but more so I promised myself that I would buy some machines to make all this tedious work easy. There had to be some machines out there right?” Evangelista recalls.

This family business grew exponentially but the workload remained on the family without hiring outside help.

“As most African families at inception of business, labour is provided by the immediate family and people only hire outside help when the business has really grown. We did everything on our own. I hated the slaughtering and plucking process because at the end there was blood everywhere and I never wanted to eat chicken after the whole process,” the now renowned poultry innovator recollected.

Given this background, it was no coincidence that after her five-year employment contract had expired, while pondering her next move, her heart pointed her in the direction she had knowledge in- poultry.

“I studied Psychology at the University of Zimbabwe and worked for five years. After that contract, I ventured into poultry farming but there were still problems we had when I was 10 were still there, issues with brooding, slaughtering and plucking. I then went on a search venture to have viable solutions to these problems and that’s how I saw slaughtering cones and borrowed the concept to suit dimensions of our local birds as they are different from other countries’. I sold these devices in a couple of poultry companies but the sales continued to be low. I researched on why this was the case because I believed this innovation would help ease a lot of problems. The farmers told me that their chicks were dying and they had nothing to slaughter. I then co-created a brooding device with farmers and some technical organisations to come up with a chicken brooding device which is mostly bought to reduce chick mortality.”

Chekera’s vision is still to set up a state of the art farm but her business in poultry equipment fulfils her as she has helped many farmers in boosting their businesses through achieving little to zero mortality of chicks.

The serial award winning innovator is among the 14 finalists in the African Gogettaz competition funded by Higherlife and brings through various innovations from Africans.

“Getting to be a finalist in this prestigious competition is a real blessing to me and my company. While I’m battling it out with other African innovators, I have also found yet another opportunity to network and learn. Gogettaz is an annual competition that I would advise every agroprenuer to take art in.”

It remains to be seen how she will fair in the Gogettaz competition, but all thousands of farmers she has assisted throughout Zimbabwe are a testimony that she will go far in bringing sustainable solutions to problems in the poultry sector leading to ‘no poverty, solutions to hunger and economic success’.