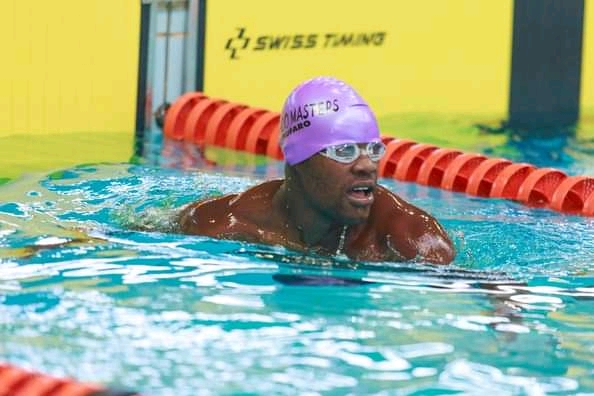 Growing up in the rural areas of Chiundura, in Gangarabwe village, I enjoyed frequent visits to the forests to collect fire wood and to the river to do our laundry. It was the rule to bath in the river and swim while we were at it. For me the whole adventure was met with bitter-sweet feelings.  Both my eyes and nose felt like screaming each time I lifted my body out of the water.  Unlike my weird experiences in the water, small children now are very fond of swimming and more facilities are available at their disposal.

A few months ago, I visited another place which still holds memories of sentimental value, Mambo Community Swimming pool.  A young man greeted (Mufaro Jonasi) and directed me into the reception area.  As I sat down with the soft-spoken young man, currently working at the pool, a million questions flooded my mind. I wondered why he had decided to teach youngsters how to swim. What he said amazed me so I kept on asking more questions.

“I started swimming when I was very little, after a near fatal drowning incident, but not competitively, that was when I was in high school. I took a natural acumen towards breast stroke and I was the best in the team,” said Mufaro Jonasi.

Jonasi competed in several National Schools Tournaments and was amongst the best in Zimbabwe from 2006 to 2008.  In the year 2007 he had a little rebellious teenage phase but he learnt his lesson, humbled himself and fought back for his spot.

We pride in the achievements of the Minister of Youths, Arts, Sports & Recreation Minister Kirsty Coventry’s achievements having won 1 Gold, 1 Silver and 1 Bronze Medal at the 2004 Greece Olympic games and then in Beijing she won 1 Gold and 3 Silver Medals among several world titles.

It is one thing to be talented and exceptional in your trade but when discipline and such other principles are foreign in your lifestyle, your character would be nothing to write home about.

Jonasi said much appreciation is extended to his coach who opened his fatherly arms and nurtured him and other boys both in and outside the pool.

Jonasi said when it comes to empowering the boy child, there is need for a youth empowerment agenda to drive forward through absorption of labor industries to give young people a chance to develop their capacities to grow economically.

“Our coach Mr. Craig Biza was like a father; he was a specialist at building relationships with us outside the pool. He helped us become model citizens and good gentleman. After high school in 2009 I did train on my own and in 2010 joined the Marlins Club from Arcadia, winning my first bronze medal in the 200m breast stroke. The following year 2011 I won the bronze medal in 200m backstroke. The year 2012 was my breakout phase winning the Gold Medal in 100m breast stroke. I decided to leave Marlins Club and as an unattached athlete in 2014 I won 2 the Silver Medal representing Aquarium Gweru based club.”

It is clear to me that Jonasi has and is still living his best life. His passion is being intertwined with his purpose. He believes that swimming and sports are tools through which he can make a difference.

“So now I’m helping young kids by providing them a platform through which they can achieve their athletic goals and dreams. I am so passionate about low-income communities and how I can be involved in the effort to reduce the socioeconomic inequalities in such areas maybe one day I’ll run for Public Office,” added Jonasi.

It is said it takes a village to raise a child and Jonasi continues to appreciate all the coaches he has had along his journey.

“During my high school at Kutama College,  Mr Craig Biza pushed us to the breaking point testing our limits and he really was just a great coach to us, moulded us to become fine gentleman. Mr. Biza was interested in your welfare beyond the pool, he always wanted to know if you were taking your classes seriously and if you were not up to any mischief,” said Jonasi.

“When I did Botswana Swimming Sports Association Championship (BSSA) I was in the hands of Mrs Charmaine Ebrahim and also when I went to SA until the Masters Swimming Championships in Durban I have been working with Charmaine since 2012, she coaches the Piranhas in Phikwe Selibe in Botswana and we remain very good friends.”

In 2015 he started just as a lifeguard and swimming instructor at the City Pool. Now he is the Pool Supervisor at Mambo Pool With such as opportunity of travelling the world with swimming, Mufaro Jonasi still finds time to give back to the community through his acquired skills. I believe it is time for each and every person to look at the human mirror and find something that we possess which can be beneficial to the next person, the community.