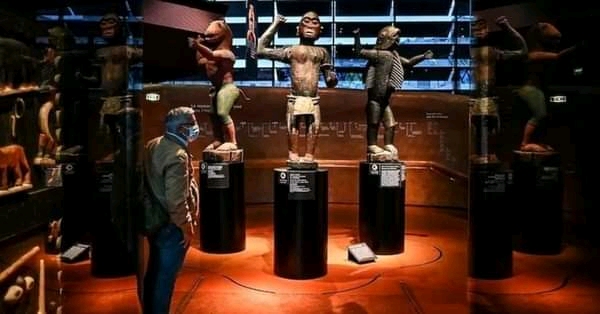 During the colonization of Africa, it was not only the land and natural resources that was stolen from the continent.

Moreover, the inheritance and culture were looted by the colonizers.

France is one of the few former African colonisers who are trying to mend their relationship with the continent by returning the stolen ornaments.

“I can’t accept that a large part of cultural heritage from several African countries is in France,” President Macron.

This has sparked a debate in Europe as some countries still hesitate in returning the ornaments which were stolen, as they believe that their museums will be left in vacuum.

Several African countries and Heads of States have echoed the return of their ancestral treasures as some believe that Africa is not independent without the ornaments.

Zimbabwe is among other African countries whose treasures were looted by its colonizers.

‘A Soapstone sculpture of a fish eagle which appears in the country’s official documents, bank notes, national flag etc has been a symbol to the nation as it’s national emblem.

A number Zimbabwe’s birds were looted from Zimbabwe’s Ancient City ‘Great Zimbabwe’. Only eight of them have been recovered, one of them was returned from Germany.

It is believed that German missionary sold it to the Ethnology Museum in Berlin in 1907.

Another bird remains in the bedroom of the 19th Century of British’s imperialist, Cecil Rhodes who had looted some of the birds to South Africa in 1906.

South Africa has only returned one bird.

The head of Zimbabwe’s National museums, Godfrey Mahachi once described the birds as sacred and unique.

“The birds are among the most symbolic cultural objects of our time,”said Mahachi. (Source BBC News)

Some residents of Zimbabwe believe they are many ornaments and objects that were looted by the imperialist that were not detailed down.

Zimbabwe is not the only African country that has been echoing the return of its cultural ornaments.

Around 514 Asante Royal Regalia ended up at the British Museum.

A report made to Aljazerra by the Freedom of Information,12 of its items of Asante Royal are in display and can be seen for free on a visit to the British Museum.

The Asante Royal has made several requests to the British government to return the looted treasures but their request fall into deaf ears. (Source Aljazerra News)

The Nairobi Museum once showcased empty shelves which represented more than 32 000 objects looted by colonizers.

The Benin Bronzers, Man eaters Of Tsvaro (Kenya East), Rosetta Stone are some of the ornaments that Africa is still demanding. (Source Aljazerra)