Home>News>Sports>Cheetahs Through To World Cup 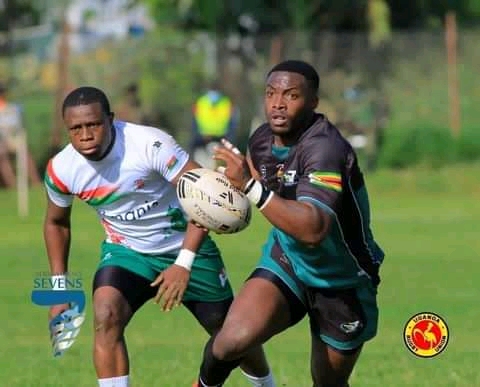 Team Zimbabwe’s national rugby team also known as the Cheetahs have qualified for the Rugby World Cup 7s as they took the second position, during Africa 7s Rugby which was played in Uganda on the 23rd to the 24th of April.

The Cheetahs’s qualification to the World Cup which is going to be held this year in South Africa, was confirmed after they won 27:17 against Zambia, in a game that was played earlier on before the finals. To determine who will be crowned the African Rugby Men’s Sevens Champions.

Despite the Cheetahs lossing the game to Uganda with score lines respectively being 00:26, in favour of the hosts Uganda. Zimbabwe had already booked their tickets to the World Cup along with Kenya that played against Zambia to determine the third African team that will be joining the Cheetahs and the African Champions (Uganda).

In their debuted match of the tournament, the Cheetahs were beaten by Burkian Faso 12:14 respectively. They then played with Kenya and won the game 24:19. The Cheetahs later faced Madagascar and they continued in dominating the game as they won 40:00.

Team Zimbabwe later before they faced their neighbors Zambia, they had to pass through the Namibian team . Cheetahs won by 27:12. Zimbabwe’s rugby team has been showing positivity in the international and regional stage competitions. Recently the Junior Sables (U20) won the Barthes Trophy Championship which was held in Kenya.

Some of the highlights scores are:

In addition to the positivity of the rugby sport, the Zambezi Challenge Cup Championship saw Zimbabwe’s cheetahs playing in their home soil on the 9th to the 10th of April. 5 local teams,4 women’s teams ,6 Junior clubs were joined by regional teams from Zambia and Botswana for the title Championship.

The tournament was used to assist Zimbabwe’s national team to prepare for the Africa’s Seven Rugby Cup .

The lady Cheetahs played against: Lesotho, Botswana, Namibia, and Mauritius.

Namibia, Senegal, Cameroon, Burkina Faso, Botswana, Ghana, Zambia, Mauritius, Burundi, and Madagascar are part of the countries that have missed an opportunity to this year’s World Cup.