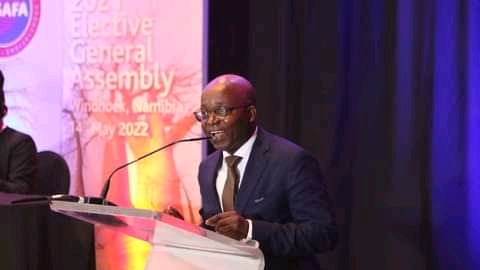 The Premier Soccer League recently announced the suspension of all Castle Larger PSL matches with immediate effect until further notice.

The suspension occurred due to a chaotic match which was held this past Sunday at Barbourfields stadium in Bulawayo between the two rivals Highlanders and Dynamos.
In a press statement, the PSL stated out that they condemn the hooliganism that has been taking place in PSL matches.

“The PSL strongly condemns such acts as they can only serve to tarnish the beautiful game of football. We are currently engaging all key stakeholders to find lasting solutions to these challenges ,”said the PSL organisers.

The PSL noted that they requested Highlanders FC, Dynamos and the Zimbabwe Republic Police to assist them with reports detailing the events that transpired at Barbourfields Stadium on Sunday the 15th of May 2022.

On another note, a disciplinary action is said to have been conducted after the reports.
The PSL also apologises to the soccer fans, sponsors and promised to tackle the issue before the resumption of the PSL soccer match.

Dynamos football player, Bill Antonio, apologised to Highlanders player Andrew Tandi who got injured during the match by Bill Antonio .

“I am sorry for what happened yesterday it wasn’t intentional. I pray and hope that you have a spread recovery Andrew Tandi,” said Antonio.

The match was abandoned with Highlanders leading with 1-0 Dynamos as the spectators had invaded the pitch .

Angolan Artur de Almeida e Silva was elected last week as the newly COSAFA President. He is taking over from Philip Chiyangwa who was in the helm of the position for five years.

During his appointment they were also five ordinary members who were also appointed along with him. These are : Eswatini Timothy Shongwe; Malawi-. Walter Nyamulandu Mand; Zambia- Ms Brenda Kunda; Mozambique-Faizal Sidat and Lesotho- Khiba Mohoanyane.

Artur promised the regional soccer fans that during his tenure in office he will resolve conflicts within members of associations and attend to them before they reach the motherly global and regional boards, FIFA and CAF.