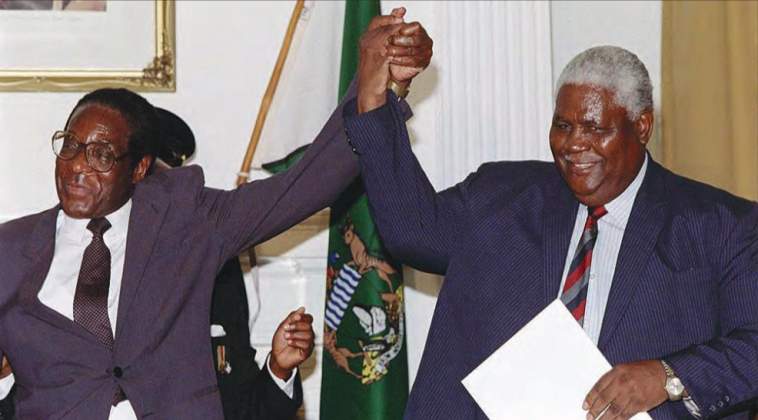 Zimbabweans traditionally every year on the 22nd of December, celebrate Unity Day which came about in 1987 following a treaty which was signed between the late leaders of PF ZAPU and ZANU, Joshua MN Nkomo and Robert G Mugabe in 1987.

The treaty is recognised as the Unity Accord.

Divided we fall, united we develop and achieve.

President Mnangagwa who is the Head of the State, shared with the nation his Unity Day message, which was televised in the country’s national broadcast ZTV.

He said there is no room for conflict, division and hatred among Zimbabweans.

“Through the historic show of leadership and vision by our founding fathers, our nation escaped the baneful cycle of lost independence conflict. We take pride in the fact that the agreement was homegrown with our two liberation movements, namely the Zimbabwe African National Union (ZANU) and the Zimbabwe African Peoples Union (ZAPU)putting aside their differences for the greater national good. Let us always remain mindful that we are a unitary state, with many languages, tribes and cultures, united under one national flag and national anthem. There is no room for division, hatred or conflicts.

“In our diversity is our collective strength and resources to resolve questions and challenges of the day. Together we must equally tap into the vast opportunities that are presenting themselves across all sectors of the economy. Today, we, therefore, celebrate our diversity and take pride in our unity as one people,” said President Mnangagwa.

President Mnangagwa further said, elections should not be used as a scapegoat of conflict and hatred.

On the other hand, opposition leader Nelson Chamisa in his Unity Day message which was broadcast live on his party’s social media page, he stated out that to Zimbabweans the month of December is a unity month.

Chamisa said if a nation is not united its fruits are disharmony.

“Making Zimbabwe a winning nation, we will unite all Zimbabweans across politics, race and tribe. Unity wins peace and prosperity for nations. Unity wins nations. There can never be true unity without true dialogue and true love. We need each other. Unity is good for us all and for a thriving future. Lack of unity makes nations fail and fall. “We the citizens, yearn for real unity based on equality, tolerance, justice and freedom. This was the vision of our founding leaders, such Father Zimbabwe Dr Joshua Nkomo, who made sacrifices to bring us together. Today on National Unity Day, we recommit ourselves to building a new, great, united Zimbabwe,” he said.