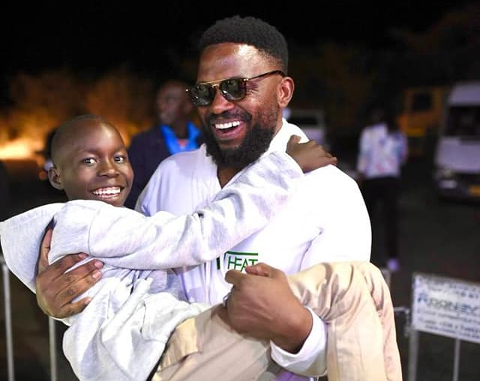 Andrea’s video is being directed by Makhadzi’s music videos director.

He is just an ordinary young boy from the dusty streets of Victoria Falls’ Chinotimba high-density suburb.

Andrea rose to stardom due to his melodious voice which charmed several artists including South African singer Aubrey Qwana who then collaborated with him on a track Uhambo.

The most significant part is that this is Andrea’s first time in South Africa, and first time to meet Aubrey in person, the artist he collaborated with on Uhambo.

Andrea will also complete the recording of his other new singles. This trip is made possible by Tinashe Mutarisi and Family, in partnership with JBross Entertainment.

Andrea was accompanied by his father on this trip.

A collaboration with DJ Maphorisa could take Andrea to greater heights as the former is a well-known artist globally.

As they say dynamites come in small packages, at his age he has become a music sensation, possibly the youngest Zimbabwean artiste to have penetrated the regional market before even making it big at home.

Andrea became an instant celebrity as he got over 3 million views on TikTok in a space of three weeks. He has now managed to get thousands of followers on his Facebook and Twitter page.