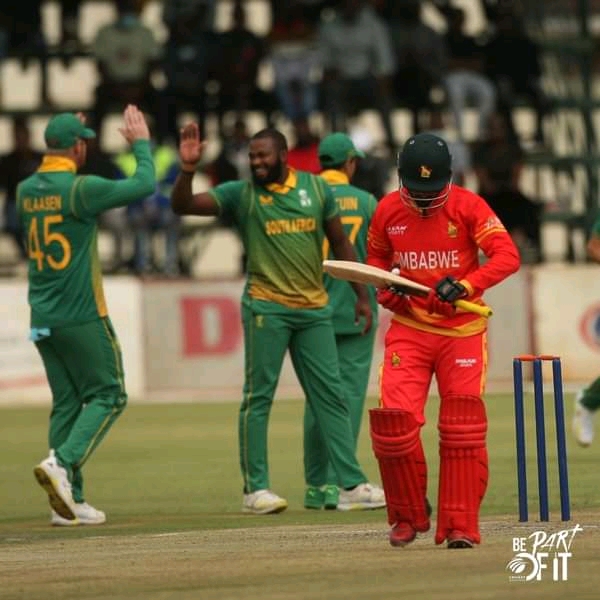 Team Zimbabwe XI continues to host South Africa Team A whilst Zimbabwe clinched the first the first ODI via DL method on the 25th of April.

The match was held in Harare and for the first time, spectators had an opportunity to watch the game live since the announcement of the COVID 19 pandemic regulations.

Milton Shumba pressed on adding an obstinate and unbeaten 45 from 50 deliveries, ending the match with Tiripano who was unbeaten for 24. The home team was not closed by the target, even after losing openers: Takudzwanashe Kaitanio (0) and Kevin Kaguza (27) at the hands of Lizaad Williams (2-29) and Bjorn Fortuin (1-54).

Zimbabwe’s XI took always 1-0 in the 3 matches on a one day serious against South Africa. On the other news in cricket, Team A got their tour of Nepal and perfect start as the battery out on a good show while chasing a challenging six wicket victory in the opening unofficial T20 match at the Kirtipur-based Tribhuvan University International Cricket stadium in Nepal on Sunday.

Lady Cheetahs have failed to qualify for the Women’s Sevens Rugby World Cup as South Africa and Madagscar make it to the World Cup.

Team South Africa had automatically qualified for the World Cup as they are the hosts of the World Cup Championship yet they had to take part in the region’s world qualification to test their strength and to prepare for the Common Wealth games.

In the first group A: Zimbabwe was grouped with South Africa and Senegal, while the second group B: Kenya, Uganda and Zambia were together. The last group C had: Tunisia the hosts, Ghana and Madagscar.

Proceedings on the first day were that Zimbabwe faced Senegal and team Zim won the match 14:12 against Senegal. Later on, as team Lady Cheetahs hosted the South Africa team and the team Zim lost the game 15:00 in favour of South Africa.

More so, in the world of Hockey, team Zimbabwe’s National team on the ongoing friendlies between Zim and Zambia, which started on the 27th of April hosted in Harare. The Hockey Association Zimbabwe before the match began the paid tribute to the past ‘icons’ of Hockey who gave of their services go willingly and in a dedicated manner to further hockey in the region and beyond International .

Tribute was made to Hilton Zuze, Brian Frager, Mark Colin and Thomas Mumba from Zambia. The National Men’s hockey teams draw with Zambia 2:2 and after the two games that were played in the four match series, Zimbabwe lead 1-0. The Zimbabwe A team also secured a draw. Team Zimbabwe continues it’s hosting of their northern neighbours (Zambia) until 1st of May.

In Golf, Zimbabwe’s National team took the third position during the first round of the Africa Region five golf tournaments which were hosted in Luanda, Angola. The team which was led by Dr M Mutopo (Head Of Delegation), Michael Wallace, Tariro November and Clifford Sibanda and Mohammed managed to make a come back in the second round as they climbed the log of the match.

Zimbabwe took the second position making them the silver medal winners while South Africa came up on top of the table as the gold medal winners and Namibia won the bronze. IMMAF International mixed Martial arts Federation were hosted in South Africa this weekend and two warriors faced each other Ken Nyaondo from Zambia face off with Lewis Mataya from Zimbabwe ,who won the Light Weight Championship by an anonymous decision .