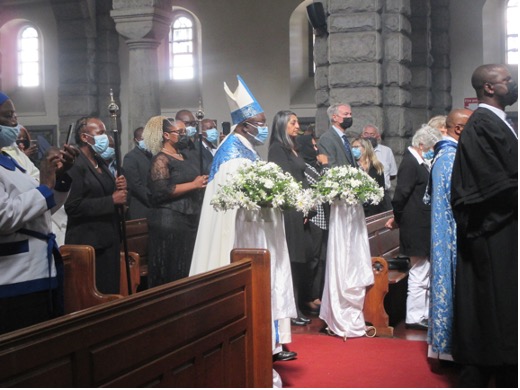 Queen Elizabeth II was the Supreme Governor of the Church of England, Head of the Commonwealth, and Head of State in a large number of countries with Anglican Churches.

Several people in Harare attended the service that also featured muffled bells that were rung as a tribute to Queen Elizabeth II.

Anglican Bishop Dr Farai Mutamiri said the Queen was a fighter, she played her role during her lifetime and she will be remembered for that.

“We the Anglican council of Zimbabwe we write to express our sincere condolences to the royal family, the Archbishorp of Canterbury, members of the church of England and the public. We have in our prayers the royal family, the new King Charles III and the people of United Kingdom as well as the Common wealth upon the death of the late Her Majesty Queen Elizabeth II.

“The important thing that the Queen did was being steadyfast, loyalty service and humility to her people. Also as a faithful christian, Her Majesty she had the faith that everything will be alright everyday of her life as a leader,” said Bishop Mutamiri.

He also prayed to God to guide and keep the new King of England, King Charles III to succeed.

At the end of the service, congregants were signing the book of condolences for the late Queen Elizabeth II.

UPDATE ON THE FUNERAL

At Westminster Hall, members of the public will be able to pay their respects to the Queen lying-in-state until the morning of her State Funeral next Monday.

The Queen’s children will keep a vigil in Westminster Hall on Friday night. Her family will be involved in the funeral procession on Monday and a two minute silence will be held around the country at the end of the service.

The Queen will be reunited with Prince Philip in a private burial at Windsor Castle after her State funeral.