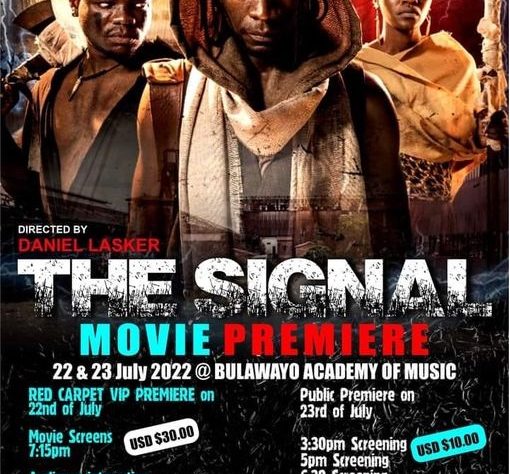 The much anticipated, Zimbabwe’s first-ever Ndebele sci-fi, short film “The Signal” is set to premier for two days which begins today and ends tomorrow the 23rd of July.

The premier will be at the Bulawayo Academy of Music.

The director of The Signal, Daniel Lasker, jetted into Bulawayo recently for the premier and he spoke to Chronicle showbiz saying all is in place for today.

Lasker said the first day has been set aside for a meet and greet with the production team.

“Friday will be a VIP red carpet event where there’ll be audience interactions with the cast and filmmakers.”

After the movie screens, there will also be a question-and-answer session and on Saturday that is when the film will be screened for the public. The premiere will be hosted by Gilmore Tee with only those who have purchased advance tickets set to gain entry as no tickets will be sold at the venue.

Lasker urged movie fanatics not “to miss out on this experience!”

“We’re so excited and honored to present this major achievement for the Zimbabwean entertainment industry,” said Lasker.

A few weeks ago, movie lovers were treated to a teaser of what to expect from The Signal. The teaser suggested an out-of-space cerebral assassin wreaking havoc among mortals with the end product being catastrophic.

Basically, the film is about a group of survivors who’re now living in that world post-apocalyptic Bulawayo and all the fun and dangerous things that happened in that world. The movie by Cross Line Pictures was written by Oscar Reyes and stars local talent in the form of Dumie Manyathela who starred in the popular movie Veza the Unfolding, Tawanda Denga, and Natasha Dlamini.

He also said the whole production was filmed in Bulawayo, his hometown.

For those who will not be able to attend the premiere in Bulawayo, Lasker said the production will be made available online sometime later this year.